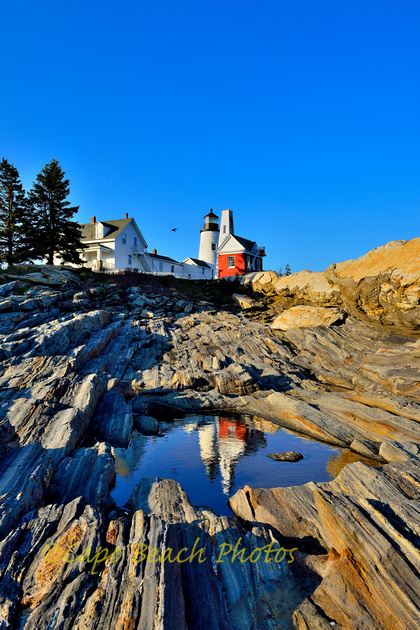 What do the native American Abanakis, the Vikings, shipwrecks, the War of 1812, ghostly images of a bride-to-be and the Maine quarter all have in common ? The Pemaquid Neck and the Pemaquid Lighthouse that's what.

Maine's most famous lighthouse marks the west entrance to Muscongus Bay in from the Atlantic, near the town of Bristol. This lighthouse is considered the flagship of the 60 currently active in the State. In 2003, Maine citizens voted to have Pemaquid Lighthouse represent the State on the backside of their quarter. The cliffs in front of the lighthouse from the ocean side are geologically unique and are well weathered from centuries of storm exposure. High tidepools offer plenty of opportunity for lighthouse reflections as you can see !

The word Pemaquid means "situated far out" in the Abanaki native language. While some excavation records show evidence (in the form of coins and jewelry) of settlements as early as 1000 A.D. by the Vikings, most authenicated historical accounts show Pemaquid to have had flourishing trade and fishing industries in the New World long before the Pilgrims landed at Plymouth in 1620.

Many shipwrecks have occurred at Pemaquid Point over the years, before and after the lighthouse was built. The first recorded shipwreck off Pemaquid Point was that of the 240-ton English galleon "Angel Gabriel" in 1635. Having sailed from Bristol England with passengers, crew, supplies and livestock for the New World settlements, it took two months for the ship to reach the Maine coast. While most of the crew were ashore during the first night for much deserved shore leave, the Great Colonial Hurricane of 1635 hit the area and the ship was dashed against the rocks. All cattle and horses were lost. Only two of the remaining crew aboard made it safely to land. There was one crew member whose journey on the ship was to be his last before returning to Maine and his bride-to-be. It is said her ghost haunts the lighthouse even today, while she awaits her finance'e to reach shore after the sinking. Visitors have reported seeing a momentary glimpse of a shadowy female form dressed in a white gown. Lights have turned on and off mysteriously in the tower at all hours of the night with no one present.

Even after the lighthouse was built there were devastating shipwrecks including the Edmunds (1903), Annie Collins (1891), Alice Higgins (1893), the Sadie / Lillie (1903) and the Willis Guy (1917). In 1813, during the War of 1812, the U.S. sailing warship Brig. "Enterprise" fought it out with the English warship "Boxer". Neither ship sank but both were heavily damaged with casualties on both vessels including both captains, all witnessed by Bristol inhabitants from shore.

Originally commissioned by our sixth U.S. President John Quincy Adams for $4,000 the Pemaquid Light started off atop the keeper's dwelling in 1827, at the SE point of the Pemaquid Neck (Maine term meaning a long finger of land). It had to be reconstructed as a new 30 foot whitewashed conical rubblestone tower in 1835 where it presently sits, overall some 79 feet above the water below. The original stone masons in 1827 used salt water as a mix with the lime mortar which caused the demise of the original structure. Extensively repaired again in 1857 from storms and exposure to the elements, its ten-sided iron lantern room was fitted with a 4th order Fresnel Lens and a new one and a half story keeper's dwelling. The original Fresnel lens still operates today and allows the beam of light to be seen some 14 miles out to sea. A fog-bell brick structure was added a few years later (seen in red brick in the photo above) and the bell had to be hand operated until an adjacent weight tower was added years later so the bell could activate mechanically.

In 1934, Pemaquid became Maine's first automated sentinel of the night along the Maine's rugged coastline. The fog-bell brick structure and weight tower had to be reconstructed after they were destroyed by hurricane Bob in 1991.

The most dangerous part of taking this photo was keeping an eye on the crashing waves behind me. It was a fairly calm day on the water as I was standing about ten feet from the water line but swell after swell threatened from behind. Photo was taken late in the afternoon with a Nikon D800, 24-70mm zoom lens set to 32mm, f/14 at 1/60s, matrix focusing at ISO 100. This photo is perhaps one of my most favorite of the recent trip to Maine.