The Lost City of Saint Joseph 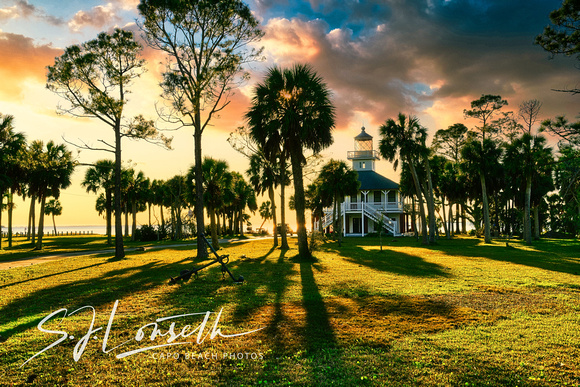 The Lost City (and Lighthouses) of Saint Joseph -

The St. Joseph Bay Lighthouse was a white washed brick conical 55 foot tall tower built at the northern tip of the 15 mile long St. Joseph Bay peninsula. The oblong shaped peninsula is about 6 miles at its widest point off the Florida mainland gulf coastline and is now a wildlife preserve. The bay is open to the north and had as much as 60 feet of depth for ships seeking shelter from the Gulf storms. Built in 1838 due to the ever growing popularity of the town of St. Jospeh on the mainland, the old lighthouse marked the entry into the natural harbor of St. Joseph Bay.
No images of this lighthouse exist. It had only one lightkeeper and was abandoned in 1847 in favor of a new light at Cape San Blas, rebuilt at the southern tip of the peninsula elbow which jetted out into the Gulf of Mexico. All remnants of the old St. Joseph Bay Light were washed away in 1851 by a storm surge. The short story of the town and the lighthouse that was built to serve it follows below. . . .

Saint Joseph Bay was a perfect natural harbor for ships seeking shelter. One of the few such harbors on the gulf side of the Florida panhandle.
Wealthy land owners and businessmen from nearby Apalachicola 20 miles inland to the east and as far away as Tallahassee moved their enterprises to the shores of this natural harbor to take advantage of the economic boom here. They wanted to establish a hub for the cotton trade and more, to draw business from nearby Apalachicola that was hampered by a shallow bay where barges were used to load/unload ships. St. Joseph unofficially started in 1822 but began real expansion in 1835. By 1838 it had more than 10,000 people calling it home. A railroad was vital since the bay had no rivers feeding into it and therefore no barge traffic. The railroad was built to help support the cotton and lumber trade shipping out of this strategic port location. It was Florida's own first major railroad, and by 1839 was renamed the St. Joseph & Iola Line. In 1838 the territory of Florida held a convention in St. Joseph for drafting the territory's state constitution. By all historic accounts, Tallahassee was the capitol of the Florida territory at the time, but St. Joseph was preparing itself to become the new state capitol due to its increasing popularity and rising affluence and prestige if it had not been for what was to transpire. Florida was admitted to the Union as the 27th State in March of 1845. The town of St. Joseph would never see it.

By 1839, Saint Joseph was Florida's largest city and flourishing to the point it rivaled Charleston and New Orleans for beauty, prestige and influence with a population of as many as 10,000. The town was laid out on a grid pattern with a majestic beauty that competed with other large cities having designated areas for houses, churches, cotton mills, brickyard, lumber mills, banks, hotels, city parks, a race track, industrial areas with warehouses for the cotton trade and then the large, wealthy slave plantations located slightly inland bordering mosquito infested uncontrolled swamp lands. Most large buildings including the warehouses were built of brick but houses and others were made of wood. Commerce Street was main street that ended with an 1800 foot long pier out into the Bay allowing railroad cars to come ship side to load bales of cotton and lumber. By all accounts, this was a thriving, booming new city on the Gulf. Hopes were high and business was good.

But along with all the good came the bad that festered corruption and according to local newspapers of the time. . . wickedness. The brothels, gaming houses, drinking establishments, gambling all were a part of it. Seaman loved docking here for those activities. At first, the town was revered more as a resort town but that quickly changed. By late 1839 it was known as Sin City throughout the territory and had an aire of vice and evil.
In 1837 came the financial panic throughout the country. Though not immediately affecting St. Joseph, it did play a role in its downfall.
Early in 1841, banks around the country were beginning to fail and the price of cotton tumbled, which led to the 1842 bankruptcy of the local railroad which was then sold at auction. The estimated worth of the railroad in 1839 was at $500,000; at auction in 1842 it sold for just over $17,900.

In September of 1840, the Schooner Herald of Boston in route north from the West Indies docked at St. Joseph to bury its captain Geo. L.L. Kupfer who had died two days earlier at sea; cause of death - yellow fever.

Other ships also docked with sailors carrying yellow fever. Sick sailors on board these ships were left behind to recover. But instead of their recovery, it led instead to an epidemic the town was not prepared to deal with. Yellow fever spread among the residents by mosquitos from the local swamps. By mid summer of 1841, inhabitants of St. Joseph had been dying by the dozens and buried in large unmarked graves in the local cemeteries. People left town by whatever means they could find with few if any of their possessions. In the fall of 1841, the town also suffered a severe fire that burnt most of the town's wooden structures and a good portion of the wharf was destroyed by a hurricane. In a period of just a few months the population shrank to only a few thousand. Historic records show that some 1100 persons in town died from yellow fever between those late months of 1840 until mid summer of 1841. Many people fled town in hopes of escaping the devastation. But what they did not know was that the yellow fever "death" followed them, they were already infected and they later died in their hometowns where they thought they were safe. By early 1843 there remained only 500 people in old Saint Joseph, then nothing more than a small fishing village. The final destruction of the town came by way of a hurricane storm surge in 1844 that broke through and over the narrowest strip of the peninsula separating the Bay from the Gulf. It leveled what was left of the once prosperous town of old Saint Joseph. By 1854, the town of Saint Joseph was no more, the last U.S. post office had closed it's doors. The town remained abandoned for some 40 years. In the early 1860's the Confederates started up a salt works factory in St. Joseph that was destroyed by shelling from a Union gunship.

The lighthouse keeper at the St. Jospeh Bay Lighthouse from 1838 until its government closing in 1847 was Ephraim Andrews who never contracted yellow fever. He had remained isolated from the mainland and the town while living out on the northern point of the peninsula.

In 1902 the area saw a resurgence with a new town called Port St. Joe, located about two miles north of the old town site. The new town even today still shares the old cemeteries, segregated into blacks and whites including the large unmarked grave sites of the yellow fever victims. The mainstay of the new town was not only cotton and lumber but also oranges brought in by rail.  The resurged popularity of the area also brought the need for a new light station located on the mainland at Beacon Hill and just slightly north of town in parallel with the original St. Joseph Bay Light at the north end of the peninsula some five miles west. The Beacon Hill light was actually a rear range light and built more like a private square shaped house with wrap around porch having a lantern atop. It was deactivated in 1960 and sold to a local farmer in 1967 for $300 who moved it inland and used it as a barn. The lantern was destroyed in the move. It again was sold and moved in 1978 to Simmons Bayou on St. Joseph Bay. That owner took decades to restore the lighthouse structure to its former glory including a new lantern atop but without the lens itself. The photo of this lighthouse now named the St. Joseph Point Lighthouse is included above in this post. It is located about 8 miles south of the current township of Port St. Joe.

The Cape San Blas Light at the southern tip of the peninsula, since its inception, has been under the threat of destruction from the constant erosion and storms of the Gulf. The Air Force closed the Lighthouse District in 2012 and had considered dismantling the skeletal light tower permanently. But through negotiations and release of ownership of the Light and the keepers dwellings in 2013, the Cape San Blas Light and dwellings (see the last blog on our website: https://www.capobeachphotos.com/blog) were relocated in 2014 some 12 miles north, to Core Park in Port St. Joe where it stands permanently on display for visitors and local town folk alike.