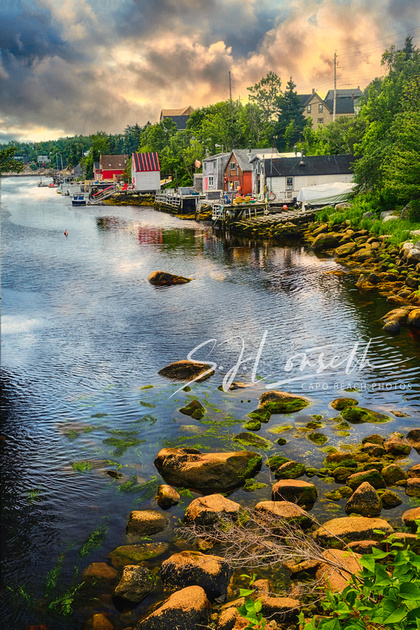 Driving to the southwest out of Halifax one morning in August 2019 on highway 253, we were on our way to photograph the Chebucto Head Light at Duncan Cove off Highway 349. About 15 kilometers down the road from downtown Halifax, I spotted a little fishing cove that certainly looked picturesque. With camera in hand I had to stop. This was Herring Cove, a regional municipality suburb of Halifax of about 3000 people. The town had been a productive fishing community and remnants were still very visible. However, that working industry had faded. One of the last locally famous full-time fisherman of decades past retired in 2018. Today's fishing activity here consists mostly of a few lobster boats moored to the old docks in the cove, some of which can be seen in this photo.

What I did not realize at the time I took this photo is that this little rural bedroom community is the major North American hub of internet cabling between Europe and the U.S. / Canada. Who knew ? This fact is so obscure that not even some of the locals are aware of its significance. Herring Cove Nova Scotia is the shortest point between our continent and England and subsequently the rest of western Europe. As of 2015 it is the landing point for the densest cluster of sub-50ms (millisecond) trans-Atlantic fiber optic cables between the two sides of the Atlantic. There are several major routes that "land" here including those from London (5500km), Liverpool and Dublin Ireland. Branch cables run 750km from Herring Cove to Lynn, Massachusetts (north of Boston) connecting to the U.S.

Hibernia Networks began work just prior to the year 2000 ( and finished in 2003 ) to establish a 30,000 SF landing point station at Hospital Point in Herring Cove . In 2015, Hibernia Express ( later sold to Global Tech Telecommunications in 2017 ) expanded the investment when they laid the newest high tech clusters of 8 pair copper clad fiber optic cables across the Atlantic that enabled sub-50ms connections. The term "sub-50ms" speaks to the latency or delay in the internet connection signal. Today's cable connections to London provide a "ping" rate of less than 45ms and better. In layman's term, that means that a signal sent from New York for example can reach London and back again in less than 45 milliseconds. Milliseconds, that's a very big deal, the speed of light kind of a deal. The cabling laid in the initial cabling in 2003 were producing rates at only sub-70ms. Today, financial markets in New York can make virtually instantaneous trades with European markets. Very important indeed in today's business world.

The world is not connected by the "Cloud" as they say, but rather by the speed of light undersea cabling signals.

Who knew this about Herring Cove Nova Scotia anyway ? Now we know. . . .