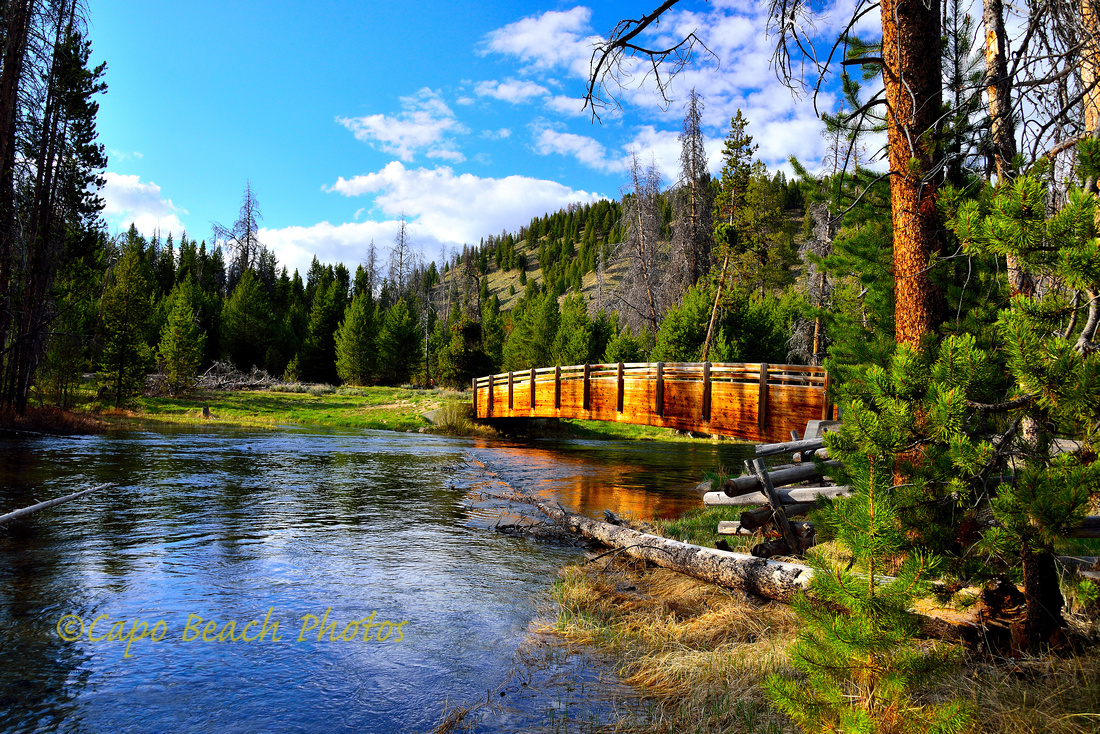 Located just off Redfish Lake Main Road near Stanley Idaho and constructed in early 2012 as a reroute of an existing trail head, this glu-lam wooden beam structure spans over Little Redfish Creek just below Little Redfish Lake. Being in the Sawtooth National Forest, construction was overseen by the USDA Forest Service, yet constructed by a private firm. Depending on the time of year, one can see Sockeye Salmon from this bridge returning upstream to spawn. Sockeye, also known as red salmon and blueback, have a vibrantly red color especially in spawning season. Redfish Lake gets its name from these red-colored sockeye salmon. Some sockeye have traveled 900 miles to return to spawn at this location, the farthest inland destination for red salmon in the U.S.. The sockeye Salmon population was terrible in the 1980's and into the early 1990's due to overfishing and environmental impacts, so much so that only one lone fish was counted in 1996 and that one fish became a legend known as Lonesome Larry. A local salmon hatchery along with other efforts have been instrumental in returning the salmon population.  Efforts to regain the salmon population have resulted in thousands returning to Redfish Lake in 2010.

The Sawtooth Mountains have been home to large glaciers in the past, some as recent as 1850. There are 57 mountain peaks over 10,000 foot elevation in this wilderness area, the highest of which are Thompson Peak at 10,751 feet and Mount Cramer at 10,716 feet. There are over 350 miles of wilderness trails throughout the Sawtooth National Wilderness Area. This bridge is the trailhead to about 12 high-elevation trails.

In 1983 there was an earthquake in the Sawtooth Mountain range that registered 6.9 on the Richter scale. Known as the Borah Earthquake, it sent huge house-size boulders into southern Redfish Lake that can still be seen at the lake bottom. In 2010, a 40 mile long easterly lying fault line was discovered running through Stanley Idaho and Redfish Lake. Scientists say this fault line is capable of producing a 7.5 magnitude earthquake.

This photo is one of my most favorite. There is a rich natural magic here: the serenity of the total scenery showing the luscious greens, healthy pine trees standing tall with red-brown bark, a new seedling merging from the marshy creek bed, a fallen tree trunk lying in the creek with the weathered wood colors of the glu-lam beam bridge structure crossing over a deep-blue, slow moving creek full of salmon.