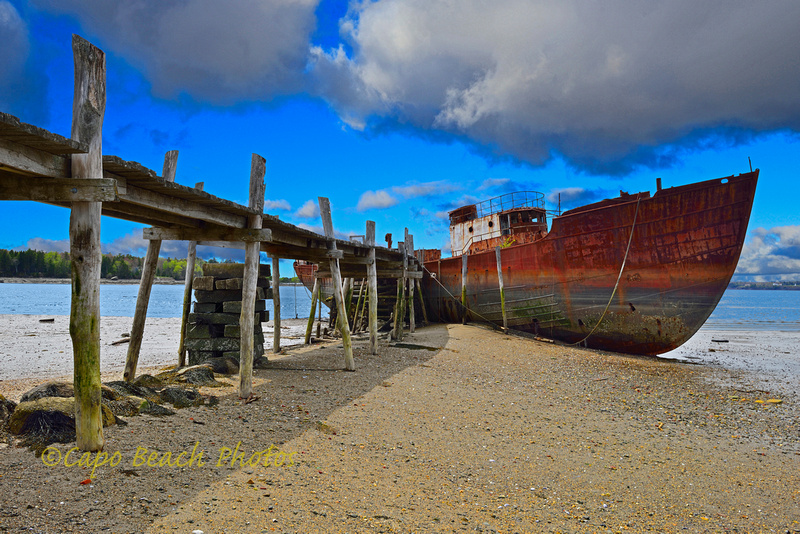 Along State Road 166 to Castine, Maine lies the Morse Cove Marina. The small little two lane rural road is a round about way to get to the Dice Head Lighthouse at the entrance to Penobscot Bay. Hardly a highly travelled tourist thoroughfare, the small road is lined with alder and birch trees that easily conceal the entrance to the marina. In a rush to get to the lighthouse, I had time for no other distractions that day, I was on a mission, after all, to photograph another lighthouse. But out of nowhere while traveling down this rural two lane my eye caught a glimpse of a burnt orange object near the water of Penobscot Bay and I knew i had to investigate. The object was undistinguishable from the roadside so I turned into the Morse Cove Marina and parked. I approached the shanty one story wooden office structure and walked inside but no one was there. Stepping back outside I yelled "hello, anyone here. . . " while closing the door behind me. But no answer. It was lunchtime and so it must have been for everyone who worked there. I walked over to the large dry dock hanger on the other side of the sloping concrete boat launch ramp leading to the water. Again, I yelled, "anyone here", but again no answer. So I decided to head down to the water. There was a long narrow elevated wooden dock leading to the rusty ship seemingly stranded by the extreme low tide at the end of the dock. Despite the tide, it was obviously a long term resident of the marina. A definite salvage undertaking not for the faint of heart.

Rather than head down to the boat on that precarious wooden dock, I ventured down to the sandy rock beach to photograph the ship from high water eye-level. It was quite an image, stranded by the low tide, set against the bright-blue Maine sky laced with dark gray clouds. When a photographer sees an image like this, ripe for the taking, the shutter must fly.

I do not know much about this ship called "The Squall", an obvious salvaged marine vessel that has seen better days. Is there a hope to restore this vessel ? Or is it strictly for salvage metal ? I knew I could not let the opportunity pass me by. It is the same point I have tried to make in previous blogs, such as in Victoria Beach Ledge in March of 2014, http://www.capistranobeachphotography.com/blog/2014/3/victoria-beach-ledge. While looking for the obvious, the unexpected may appear. Turn around and take a minute or two to see what else there is.