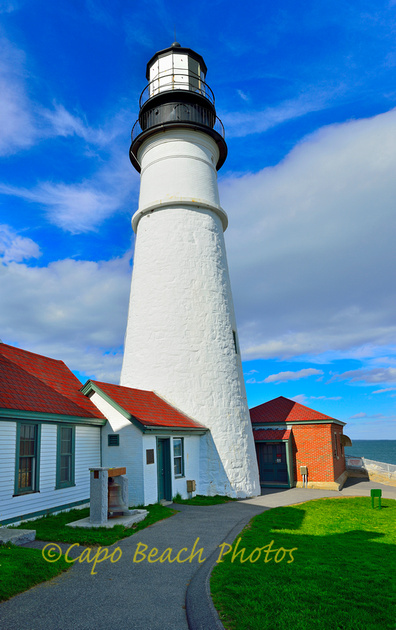 Year after year, through all the silent night

Burns on forevermore that quenchless flame,

Shines on that inextinguishable light !

Born in Portland Maine, American poet Longfellow was a frequent visitor to the Portland Head Light. His poem "The Lighthouse" was written as a tribute to his fondness of it. He would often spend hours sitting on the rocks, watching heavy seas roll in or chat here with his friend Captain Joshua Freeman, the fourth lightkeeper at Portland Head.

George Washington, as one of his duties of being the first U.S. President of a fledgling young country in 1787, commissioned the Portland Head Light to be built at the jetty of land projecting out into the Atlantic, southwest of Portland Harbor at Casco Bay. It was not only the first lighthouse of a new country but also Maine's first lighthouse once it broke off from Massachusetts in 1820. Construction was started with only $750 allocated by the State of Massachusetts but then supplemented with $1500 from the U.S. government in 1789. First lit in 1791, the first lightkeeper was Captain Joseph Greenleaf, a patriot war veteran of the War for Independence  who served under General Washington. For the privilege of tending the Light and living in the keepers quarters, he was given no salary. Wow, what a privilege ! After just six months he threatened to quit. He was then offered a salary of $160 and decided to stay. However, it still meant he needed to fish, farm and grow vegetables to sustain his lonely life as a lightkeeper. Those days of light keeping were no easy task and often took its toll on human life. Winters were so harsh here that the keeper would have to melt ice off the inside of the lantern room in order for the light to be seen out to sea. Greenleaf died of a heart attack in 1795 while rowing his rowboat back to shore.

Portland Head has been documented as the most visited, photographed, and historic lighthouse in the continental United States. Originally built by two Portland masons from local rubblestone materials, it was originally built to only 58 feet in height. But when the masons realized the tower light could not even be seen over a nearby headland, it was raised 20 more feet. That second beginning height can be seen today in the ring that encircles the top of the tower. However, when the lighthouse at a nearby barren rock ledge known as Halfway Rock was completed in 1871 at the entry to Casco Bay, the government decided the Portland Head Light was not as important as they had first thought and it was then lowered 20 feet. Within a few years there were so many complaints from mariners about the lower elevation of the tower light that the 20 feet were added back. Raise it up, no, lower it down, no, raise it up, say what ?

With the exception of being darkened during WW II for fear of German invasion it has stayed lit since it's original completion in 1791. While 16 whale oil lamps were used for the original illumination, these were replaced with a fourth-order Fresnel lens in 1855 followed by a second-order Fresnel lens in 1864 following the ship wreck just off shore of the steamship Bohemian in which 40 passengers perished. Following this wreck, the tower was enhanced with interior brick lining, a spiral staircase and a cast-iron lantern room added.

Very fortunate photographing this Light, very few visitors this day in the middle of May. It was a warm day, around 70 degrees, blue sky, with clouds, in mid-afternoon. Very accessible views all up and down the coastline at this Head with great views from almost every angle. I will post other views of this lighthouse in the days to come. Camera was a Nikon D800, shooting east with a 24mm lens, at 1/80s at f/16, ISO 100, no flash.