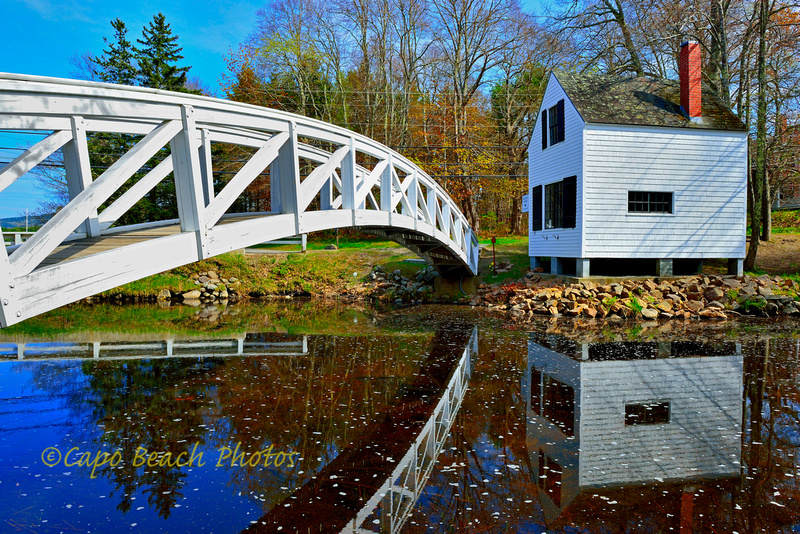 The picturesque village of Somesville in the township of Mount Desert is located on Mount Desert Island in Maine. It is at the north end of a fjord named Somes Sound. The first white settlers with any permanency in this area were Abraham Somes and James Richardson in 1761. They traveled northward from Massachusetts Bay up the coast of Maine in an open and narrow sailing craft called a Chebacco and settled at the head of the interior waterway of the island. Their families joined them there a year or so later. They had been instructed by then British governor of Massachusetts Bay, Sir Francis Bernard, to go settle here and establish mills. What they did not realize at first about the island was the predominance of stone. It turned out to be the most productive location for a lucrative industry. The island had an over abundance of siltstone, sandstone and granite. Hundreds of people followed. Stone quarries soon sprung up along with other industry as well. They named their little village, Somesville, and the inlet it was on they called Somes Sound after Abraham Somes and his family.

The settlement here was so successful that Somes and many associated with the hard work of the area soon became very wealthy. Logging mills, quarries, shoe factories and woolen mills flourished and began supplying materials to the lower colonies. The thriving stone business soon led to farming, fishing, logging and ship building industries. By 1840, the Somes family was the wealthiest on the island. Dams were built that provided power for the island's stone cutting industry and by 1886, the estimated export of cut stone from Mount Desert Island exceeded 3500 tons.

In 1975, concern was raised by the locales that so many of the historic buildings and outbuildings on the island were being lost to neglect and development that a Historic District was created and many of those structures placed on the National Registry of Historic Places to preserve the remaining buildings and residences of the original settlers. It also included their churches, school, post office, cobbler shop, trades buildings, meeting hall and library.

As you pass through on Main Street of Somesville, you cross over Somes Pond Outlet. The Sound is on the east side of the road while on the west side is the small mill creek that gently flows into the fjord. On this same west side of the road lies the historic Selectman's Building, seen in the photo above. It was built in 1780 by John Somes, son of Abraham. The building had been used as the town hall until 1911. "Selectmen" are voted by the town's citizens to conduct the official business between the annual town meetings. Over the creek lies this arched pedestrian bridge. The 1981 memorial bridge bears the name of Thaddeus Shepley Somes, a descendent of Abraham Somes.

This seems like one of the quintessential small New England rural scenes really. No hustle-bustle of a busy community, no shopping malls, no big semi-trucks roaring past at freeway speeds and no tall mega structures. It is serene and peaceful, very peaceful.