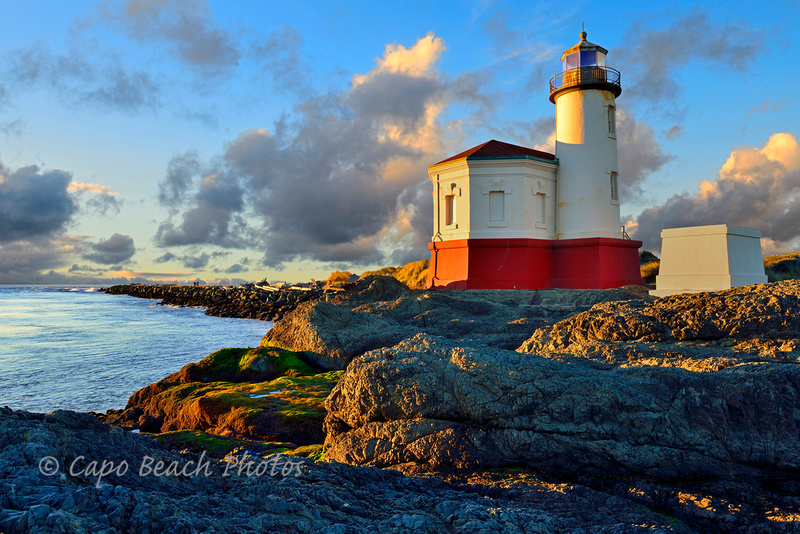 The Coquille River Lighthouse, known as Bandon Light to the locales, was first lit in 1896 with a fourth order Fresnel lens. It is located at the mouth of the Coquille River as it enters the Pacific Ocean on the southern coast of Oregon.

This is not my first blog on this lighthouse. Previously I described a little more about the history of the Light and the disastrous Bandon fire of 1936. See the link to the previous blog on May 5,2015: http://www.capistranobeachphotography.com/blog/2015/5

The image above was taken in late afternoon in November 2015. When I first photographed the lighthouse in the summer of 2014, I thought it strange that the color scheme from the last restoration in 1976 had this cranberry red color over the concrete base. It just did not look historically identifiable with the lighthouse, its history nor the area in which it resided. After all, it did not look indigenous to a historical lighthouse that for over 120 years protected the shipping lanes in and out of the Coquille river. In the past the lighthouse had been painted light grey and white, not cranberry red ! In the late 1800's and early 1900's, the area was a hub for coastal shipping related with the timber industry, ship building, fur trading and crops. It is a local crop that may perhaps lend the best explanation to the idea of the cranberry red base color painted for the 100 year anniversary of the lighthouse.

Bandon is a local center of cranberry production. So much so that it competes with Middlesborough Massachusetts as a cranberry capital, albeit on the west coast and on a much smaller scale. More than 100 growers account for 95% of Oregon's cranberry production, and about 5% of the national crop, harvesting about 1600 acres of cranberry bogs just around Bandon proper. In the fall of 1994 a record crop of nearly 304,000 barrels or 30 million pounds were harvested. Different hybrid varieties are grown here now such as the Stevens variety but it was the hybrid vine variety from Massachusetts first introduced to nearby Hauser by Charles McFarlin in1855 that had been the mainstay in Oregon. It reigned supreme in Oregon for nearly 8 decades of constant production. McFarlin had initially come to Oregon to pan for gold. He not only did not make his fortune at panning for gold, he did not even make a living at it. So he turned to the only other thing he knew and that was the cranberry vine. He brought the vines from Cape Cod and then planted these in Oregon's first cranberry bog near the town of Hauser, just north of Coos Bay. This west coast variety was named in honor of him and his success in adapting it to the coastal climate. Brandon is also the location of the country's first wet harvested cranberry bog where dikes are built around the bushes and then flooded with water.

The Cranberry Festival in Bandon is celebrated each fall and has been since 1946.