Lindesnes -At the Edge of the World 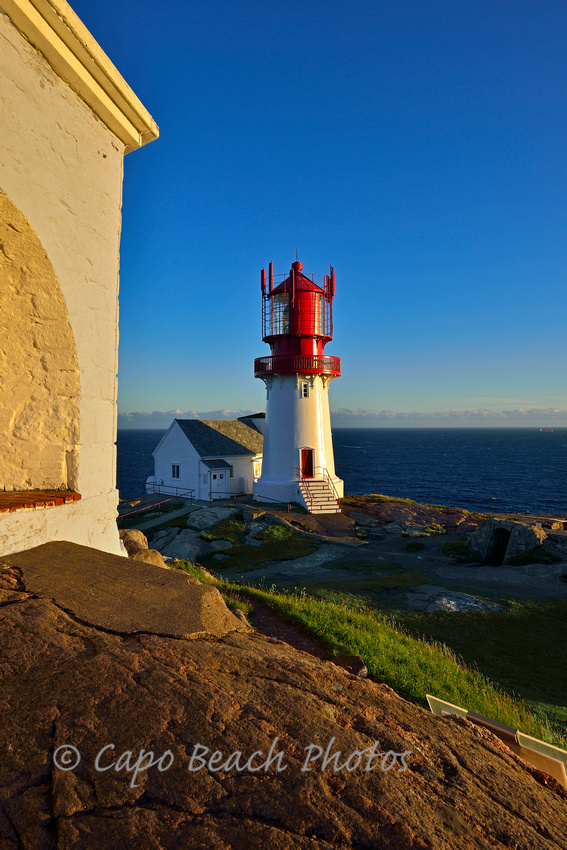 Lindesnes Light - At the Edge of the World

On a small headland on Norway's most southern tip is the Lindesnes "Fyr" or lighthouse (in english). This location was first established as a lighthouse in 1655 and is considered by some to be Norway's first lighthouse location. The Norwegian coast has had over 212 lighthouse stations but no more than 156 have been operational at any one time.

The word Lindesnes derives from old Nordic languages but in today's definition means "go to the end headlands". And when you're here you can see why it is named that. Standing at this headland you see nothing but out to the west over the Atlantic, no islands or other features to break the view. And it gets windy. It is fairly common to have sustained winds of 60mph.

While under Danish rule this site was approved by the Danish King Frederik III to have a light built here to help sailors at sea. It was financed by having sailors pay a tax regardless of their port of entry from Bergen to what is now known as Sweden. The first light was a three story timber tower that used 30 candles behind lead glass windows. The inadequacy of the light so angered sailors dependent on the light that the following year a coal fire lantern was built. Despite this improvement the king closed the lighthouse in 1656. It was not until 1725 that drastic measures were taken to provide a better navigational aid. This was done by merely lighting two open grate coal fires set on the headland rocks and maintained by lightkeepers. In 1854, a brick base with chimney was built with a sheltered lightroom that housed the coal fires. This was used until 1915 when the current 50m tall cast iron tower was built with a first order Fresnel lantern. An adjacent house was built that housed the fog signal and machinery. Originally three families were housed year round at the lighthouse. In 2003 the lighthouse was automated.

During WORLD WAR II, the Germans occupied this site as an outpost to view possible Allied naval operations up and down the Norwegian coastline. The Germans suspected the Allies would invade Norway along the coast which never occurred with any great force after the German occupation. (It should be noted that both Allied efforts and Norwegian forces held off the eventual German invasion and occupation for about 62 days, the second longest next to the Soviet Union). After the Germans manned the lighthouse site at Lindesnes, the light was darkened except as needed to aid German shipping. The site had 4 gun posts, all interconnected with tunnels and trenches.

Visiting this site at dusk when the tourists had left was ideal. Only a few scattered tourists and the site was open to photograph. It was windy and 11:30 at night. The sun was almost ready to set. Note that even though it was July 5, the sun still sets for a few hours because it is southern Norway not northern. Even with the vibration reduction feature on the 24-70mm f/2.8 Nikkor lens, it still required stabilizing myself against a nearby rock outcrop. The tripod I had was of no use due to it being of a lighter weight for traveling purposes.