Bodie Island Lighthouse Along the Graveyard of the Atlantic 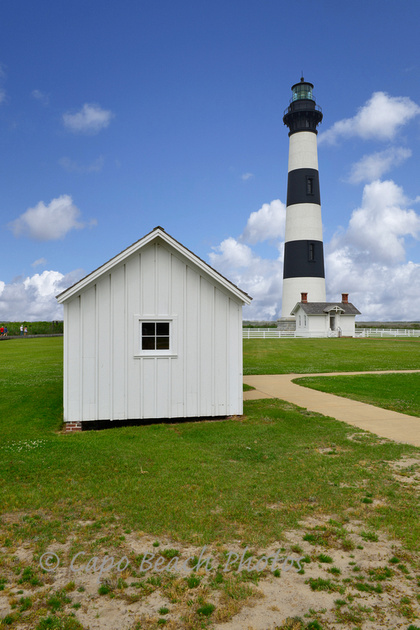 It was 1837 and something had to be done. Scores of ships were in constant peril along the Outer Banks of South Carolina due to treacherous navigation along the Carolina's coastline. So many shipwrecks in fact that the area became known as the Graveyard of the Atlantic. What few residents there were here at the time would find bodies washed-up on shore as a fairly common occurrence. There were multiple attempts to build lighthouses in the area north of Cape Hatteras, the first of which were on Pea Island south of Oregon inlet. The first Light began construction in 1847 but had to be torn down in the early 1850's due to a leaning foundation. Another replacement completed with a better foundation in 1859 was blown-up by Confederate troops in 1861 retreating to the south during the Civil War fearing the lighthouse would be used by the oncoming Union troops as a lookout that would give away Confederate troop locations. But in 1871 a permanent replacement had begun just south of Nags Head South Carolina at Bodie Island. Completed in 1872, this lighthouse would drastically reduce maritime casualties from tragic ship wrecks. The current 165 foot tall light was built with bricks from Baltimore and ironwork from a New York foundry. It was equipped with a first order fresnel lens bright enough to assist mariners setting their course regardless of whether they were navigating north or south of Cape Hatteras.

Lighthouse keepers had their share of ordeals when they first arrived, not the least of which was the fact it was secluded with the only access by way of boat. Families of the light keepers lived on nearby Roanoke Island where their children could attend school. They would visit for the summers only. Venomous snakes populated the high grass areas around the lighthouse property. Even today there are elevated walkways for visitors to avoid the snakes while strolling the surrounding areas around the lighthouse. Weather on the Outer Banks also led to extremely high ground water and tidal surges during treacherous winter storms. In 1932 the lighthouse was automated and control of it was transferred to the National Park Service in 1953. The lighthouse has undergone several renovations the most recent of which was in 2013 and it remains an operational navigational aid.