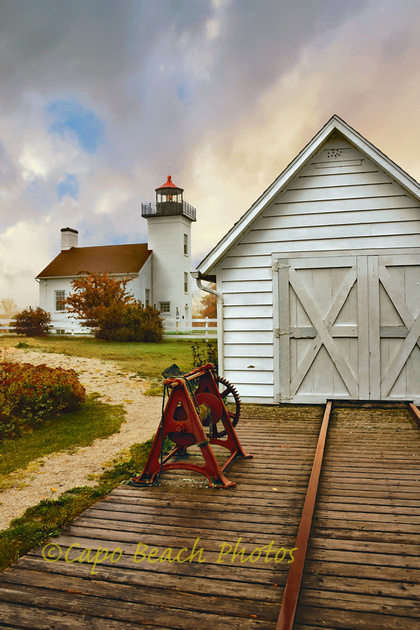 Some locals said she could not do this job. They said that it was too tough for a woman to handle the rigorous hard work routine and chores of being a lightkeeper in the town of Escanaba Michigan. Winters were harsh and rugged. Mary Terry was to prove them all wrong. . . for eighteen years she proved them wrong.

John Terry had been assigned as the lighthouse keeper by the U.S. Lighthouse Board at the Sand Point Lighthouse at Escanaba in 1866 before it had even been built. Construction began in 1867, but before it had been completed, he died of tuberculosis. The U.S. Lighthouse Board was in a habit of assigning qualified male lightkeepers to these positions. And these positions were difficult to fill. At that time, the Board was under the direct supervision of the Department of the Treasury. Up to this point in time, few women had qualified for such a position of authority as a lighthouse keeper on the Great Lakes. The first in the State of Michigan had been Catherine Shook in 1849 at the Point Aux Barques Light, who was appointed when her husband drowned in a capsized boat on Lake Huron. She was left tending the light as well as her eight children. The U.S. Lighthouse Board sometimes was put in the position of assigning women because they were either already familiar with the particular light from their husband's work or women were the only ones who applied. When a man was appointed, they would have official photos taken and issued a uniform and given professional provisions. Women on the other hand received no photos and no uniforms. But women were given the same pay as men !

Having moved to Escanaba, Michigan in 1863, both Mary Terry and her husband John had established themselves as well respected and reliable citizens of the community. The local newspaper advocated for Mary to be the new keeper upon John's death. Mary Terry lit the Sand Point Light for the first time at sunset on May 13, 1867. She held this position for 18 years until her mysterious death in 1886. The circumstances of her death were suspicious. The entry lock on the outside had been shot off. Her body was found in the oil house, not in her bedroom. She had been severely burned to the point the coroner could not fully confirm the identity of the body. Locals first thought she had been killed and the lighthouse set on fire to cover up the crime. But she had a sizeable amount of money ($4000) in a safe along with all her important papers. None were taken. There had been previous evidence that the furnace for the Lighthouse was in poor condition and some suspect that was the cause of the fire. The task of getting to the light was difficult due to its remote location on the point and this having happened in the winter, the fire department took hours to reach the lighthouse through the snow.

The lighthouse was decommissioned in 1939. The light from the fourth order fresnel lens could only be seen 11.5 miles out into the Bay. Due to dredging and shifting sands of the point, the light became further and further away from the critical location of being at the point, and visible to the passing ships. So in 1938 a crib light was established several hundred feet off the point to better warn mariners of the pending underwater rocks and sand bars jetting out into Little Bay de Noc.

The boathouse in this photo housed a common rescue boat used by the Lighthouse Board at the time. It currently houses a boat that is not original but rather a slightly larger restored wooden rescue boat that came from a nearby coast guard rescue station. The original boat at this location would have been manned by two people and pushed out to the Lake on rails and then winched back into the boat house by the type of winch you see in this photo.