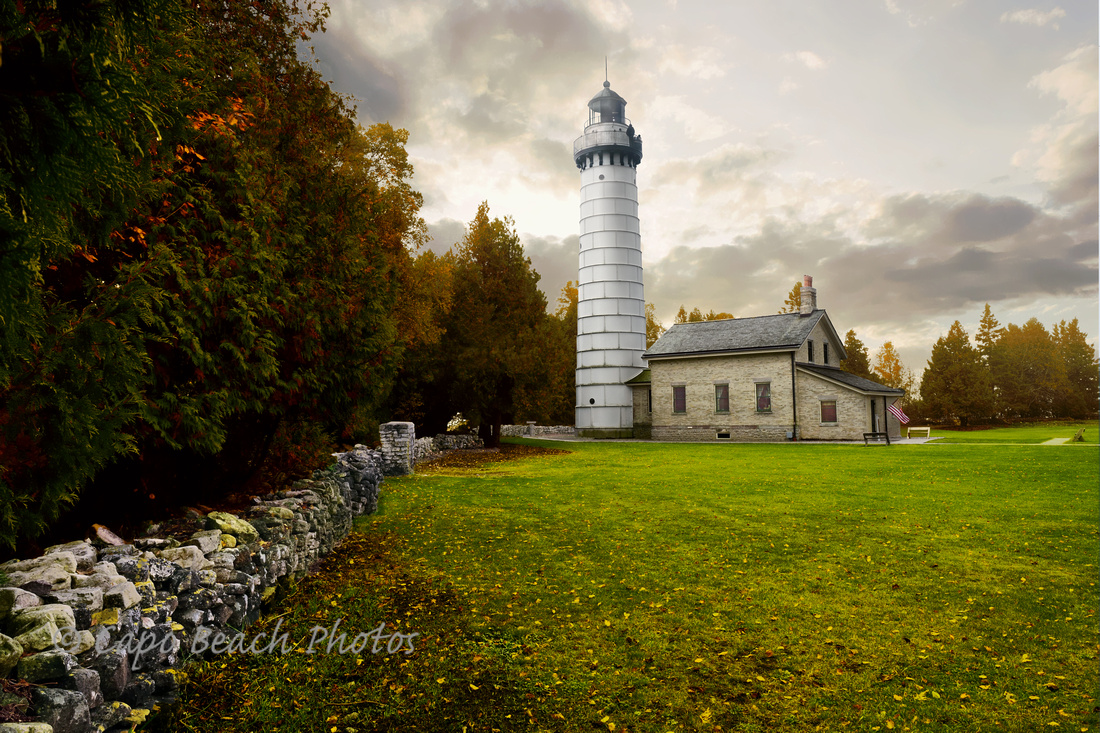 After 16 years of service as the light keepers of this lighthouse in Door County peninsula in Wisconsin, the Sanderson family including their three young boys, knew the island well. Their family farm was not too far away in Sturgeon Bay, also in Door County. Well before they even applied for the position of light keepers, they knew the location of the triangular shaped 8.7 acre plot of land known as Cana Island and how isolated it was. It had been built in 1869 as a result of the ineffectiveness of the Bailey Harbor lights built as aids to mariners entering Bailey Harbor just 16 years prior. They also knew how long, cold and hard the winters were on the peninsula. But they had not been prepared for the repeated storms of the winter of 1880, including what was known as the Alpena Gale. . . recorded as the one of the severest storms in Lake Michigan history. The island had originally been barely 10 feet above the Lake level, but was flooded by that storm in 1880. The entire base of the Light was surrounded by water. The entire first floor of the two-story light keeper's house directly adjacent to the tower was flooded. Even the second floor walls of the house were dripping with water. The Sandersons' storm experience was vividly recorded in William Sanderson's journal. He felt he needed to record all events regardless of how seemingly insignificantly they might appear because the light keepers before the Sanderson's, Julius Warren and his wife Sara, were supposedly relieved of their duties for not properly recording all activities at the Light among other things. The storms of 1880 were very tough on the Sandersons, their chickens and pig drowned from the rising water levels and the Sandersons themselves had to escape several times for their own safety to the brick boathouse further back to the center of the island.

Every year there were issues that made the stay at the Light more and more difficult. In 1882, his wife's salary as the assistant light keeper was terminated because Congress did not appropriate enough funds to pay her. Of course this did not apply to just her but all assistant light keepers that year. In 1885, Congress also decided that rather than send work crews to the individual Lights to repair and upgrade the structures as had been the custom, this responsibility would now be put on the light keepers themselves.

In 1884, Congress appropriated funds to help the flooding problem on Cana Island. But it was not until the spring of 1990, that help to do that actually arrived. Much needed rip-rap was added around the base of the Light as well as the construction of a 400 foot long surf barrier wall added to the east side of the island where the majority of the storms came from. But by 1891, the Sandersons had had enough. They submitted their resignations and returned to their family farm in Sturgeon Bay. In his resignation, and as one of his last entries into his journal, William Sanderson wrote: " Cana Island is one of the most inhospitable and undesirable places that can be imagined."

The cream colored Milwaukee brick used for the construction of the house and Light was too soft and by the late 1890's had deteriorated to the point something had to be done. In 1902 the U.S. Lighthouse Board and its engineers decided as a solution the Cana Island Light tower needed to be covered with steel plates and riveted to together in order to properly save the tower structure. These remain to this day as can be seen in the photo above. The void space between the steel plates and the existing brick was filled with concrete to ensure a more stout tower structure. The entire outside was painted white. Though the island was located a mere 300 feet from the mainland, it needed an elevated causeway for maintenance access rather than by boat. However, the causeway was built with wooden planks that soon deteriorated. A concrete causeway was later installed that made access easier and more permanent. However, the Lake water level does fluctuate from year to year due to storms and spring runoff so even the concrete causeway gets flooded over. Because of this, tourists are often "ferried" to Cana Island across that 300 feet in a tractor hay wagon.