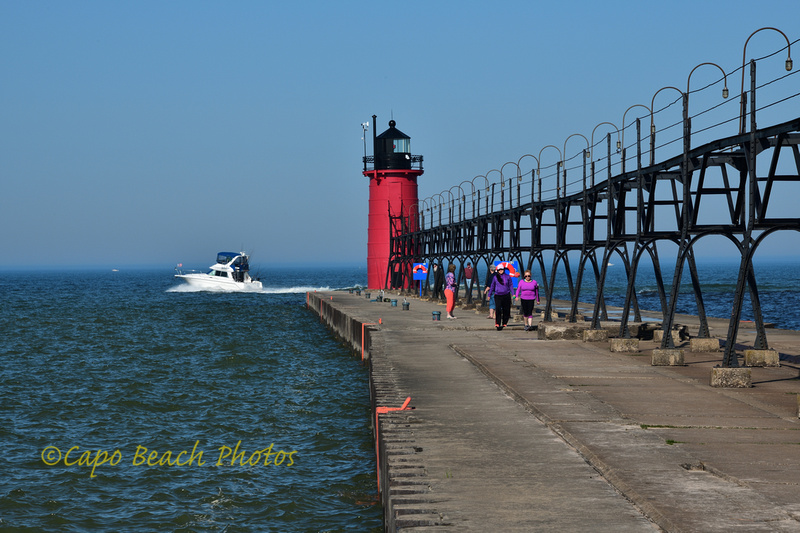 The One Legged Lightkeeper -

Captain James S. Donahue served in the eighth Michigan Infantry during the Civil War. In the Battle of Wilderness he lost his leg from the thigh down. Despite this, he was hired in 1874 at the age of 32 to become only the second keeper of the South Haven Pierhead Lighthouse. Being a light keeper even with two legs was a daunting task. They were typically on call 24/7/365. Donahue performed all his tasks admirably for 36 years which included walking the 75 foot long elevated walkway with crutches on open planks, in all kinds of weather regardless of snow, ice, fog, sun or rain. The lantern required lighting every evening and had to be resupplied with adequate quantities of oil. He also had to keep records of all events including weather, visitors, mariner accidents, repair the residence and maintain the life saving light, as well as keep all supplies ready for all storms that might come. Over his career, he and his son(s) were responsible for saving the lives of 17 ship-wrecked seaman either stranded on grounded ships and/or in danger of drowning. The tasks were relentless, day after day and the records show he never missed a day nor shirked his responsibilities. His job was not without personal tragedy. In 1875 his first wife died of lung disease, leaving only him and his son to fend for themselves. He married again in 1876 and had 5 more sons and a daughter, all shown in a family photo along with the family dog in 1893.

The original lighthouse was a wooden tower some 30 feet tall supported by pillars and connected to the mainland with an elevated wooden walkway from the keeper's house on the bluff overlooking Lake Michigan. The original wooden tower was lit in 1872 and in 1900 was relocated another 400 feet out into the lake when the pier was extended. Eventually it was totally replaced with the current cast iron cylindrical tower in 1903 and painted white (more on why most Lake Michigan lighthouses are painted red in later blogs, stay tuned). Donahue retired in 1910 after 36 years of service at the South Haven Pierhead Light. The United States Lighthouse Service, which was a newly established governing agency begun in 1910, awarded him a silver medal in recognition of his service of 36 years. However, the town folk of South Haven were so outraged that he received only a "silver" medallion that they had their own "Gold" medal forged to present to him during the retirement ceremony. Donahue died in 1917 and was buried with full honors.