Sleepy Hamlet by the Sea 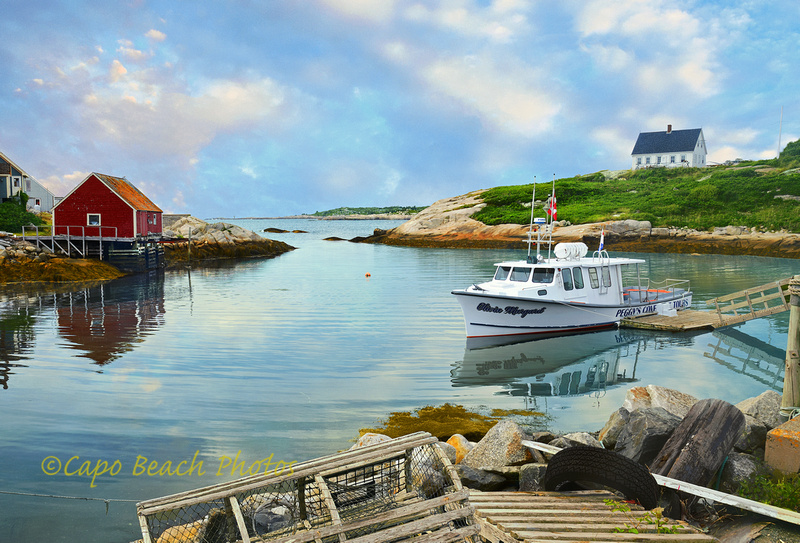 Peggys Cove Out To Sea_NS

Sleepy Hamlet By The Sea -

Peggy's Cove may seem like a sleepy hamlet but one visit there will convince you otherwise. This photo, for example, was taken next to a line of people getting ready to board this tour boat. Along either side of me at the end of the rickety old dock were ten other people trying to get that perfect photo of this little part of the village. I say village because it really is just a small collection of historic buildings that once made up an active fishing town. Sure there are a few houses scattered up on the surrounding hills but for the most part the buildings are left historic. Development here is not only discouraged but is against their local zoning codes and building ordinances. Tourist goods abound in most of the buildings down by the shoreline. Fishing still occurs here but on a much smaller scale. This town has become a tourist destination where literally thousands of camera toting foreigners and Canadians come to view the restful quaintness of this picturesque place (except for all the tourists). It is located on several large wave washed granite rock outcroppings void of any natural vegetation other than ground cover and seaweed. The cove in this photo formed naturally between some of these large outcropping knolls.
Peggy's Cove is located right on the Atlantic coastline about 45 minutes south of Halifax in Nova Scotia. Depending on the time of day, there can be as many as ten tourist buses in the village, most of which park up on the east knoll by the lighthouse and the Sou'wester Restaurant. While cars can meander through the village on a narrow two lane road, there is no large scale parking areas other than at the eastern knoll by the lighthouse. From there, people are encouraged to stroll about the village.

There are a few different stories of how this place got it's name. The first recorded name of the cove in 1766 was Eastern Point Harbour or Peggs Harbour, however the village was not recognized officially as a township until 1868. The second version is that it is named after St. Margaret's Bay, the larger body of water directly to the west. Peggy is a shortened nickname for Margaret. The bay was named after the wife of an Irish immigrant in 1770. The third and more popular version of its origin are from a book by deceased local writer, artist and sculptor William DeGarthe. In his book, a schooner tragically shipwrecked on Halibut Rock, the point on which the lighthouse is built, and the only survivor was a small girl that swam ashore and was taken in by local fishermen. Her name was Margaret. She married a local fisherman and became a local resident for many years. She gathered fame in the area as "Peggy of the Cove".