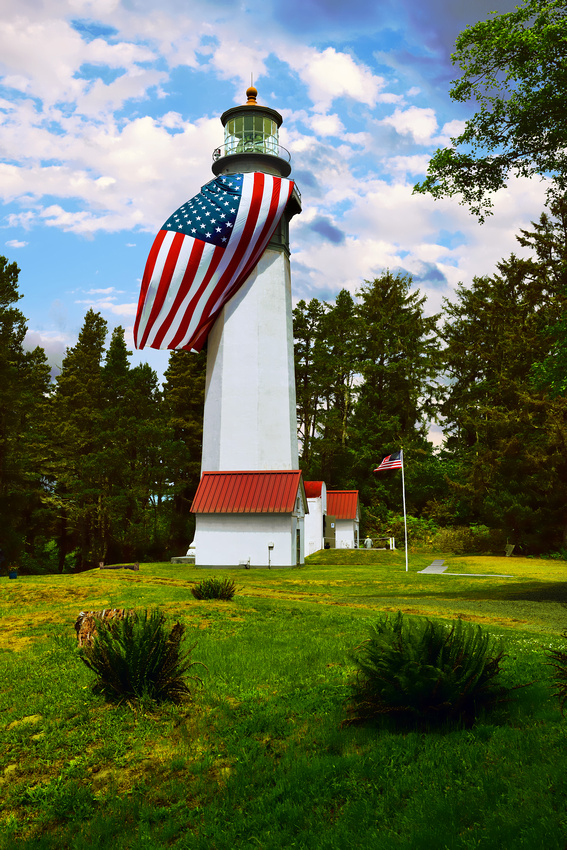 Designed by German-born architect Carl Leick, the Grays Harbor Light, also known as the Westport Light by locals, was built to mark the entrance to the only significant port on the Washington coast between Cape Flattery and the mouth of the Columbia River. In the latter part of the 1800's, Grays Harbor became America's largest exporter of lumber, over 60 million board feet by 1890. Since 1854 locals had petitioned the government for a monumental navigational light to identify the harbor entrance to mariners. In 1855 Grays Harbor was home port to over 18 whaling ships. Petroleum production eventually superceded the need for whale oil and lumber production and fish exports dominated Grays Harbor marine traffic. Fishing on the Washington coast was productive by nothing like lumber exports and ship building. Nine steam ships were completed in Grays Harbor shipyards in the early 1890's and it was very evident that Grays Harbor needed a lighthouse. It wasn't until 1884 Congress finally began funding the construction of a light. But delay after delay impacted the start of construction which began in ernest in 1897. The light was dedicated and opened in 1898.

Carl Leick initially moved to Astoria Oregon in the early 1880's and then to Portland in 1889 when he began work as a draftsman for the Engineering office of the thirteenth lighthouse district of the U.S. Light House Board. He eventually became assistant superintendent of inspections with the Lighthouse Board. He is credited for the major designs of over 25 significant structures in Washington State and Oregon including lighthouses at Lime Kiln, Mukilteo, Admiralty Head, Grays Harbor and Northhead Lighthouses in Washington and the second light at Cape Arago in Oregon. By Leick's own admission and others, the lighthouse at Grays Harbor is his best masterpiece. His motto while working on the designs as a light station designer was to "Build 'em Stout and Build 'em to Last". Leick retired from the U.S. Light House Board in 1926.

This lighthouse is Washington's tallest at 107 feet and the third highest along the west coast of the U.S. It has a 12 foot thick foundation of sandstone and the brick walls at the base are four feet thick and taper as the tower extends upward. The original clamshell Fresnel lens design in the lantern room is still in place and is fairly unique when it comes to U.S. lighthouses. The original light was rotated by a weight inside the tower and floated in a trough of mercury for frictionless rotation. The light was originally seen 16 miles out to sea. The lighthouse was electrified in 1931. In 1992 the third-order Fresnel lens was turned off and the light was replaced with a 35-watt lamp system from New Zealand ( ! ) that now can be seen 19 miles out.

Christian Zauner was head light keeper from 1898 until 1925. On April 18, 1906 he entered in his log that shortly after 5:00am he felt substantial ground shock waves that caused the weight inside the tower, used to rotate the lens, to swing like a pendulum. The 135 metal stairs inside the tower rattled to the point he felt it unsafe to use the stairs. The shock waves were from the earthquake that devastated San Francisco. But the tower stood and had no significant damage.

Visited this lighthouse in late May 2019. The flag was lowered from the lantern level balcony in honor of Memorial Day but also fitting in celebration of the fourth of July, American Independence Day.  The American lighthouses scattered throughout the country, including the Great Lakes, are another sign of our freedom where in a free enterprise system helps marine traffic get the job done whether it be moving goods or people safely up and down our coastlines. The U.S. Coast Guard has been instrumental since 1939 in keeping lights maintained and operational. Most have stood the test of time and are a testament to the American spirit, ingenuity and determination. Until the mid-point of this century, most of these lighthouses have been manned by men AND women who sacrificed of themselves through extremely harsh circumstances to keep American waterways safe.