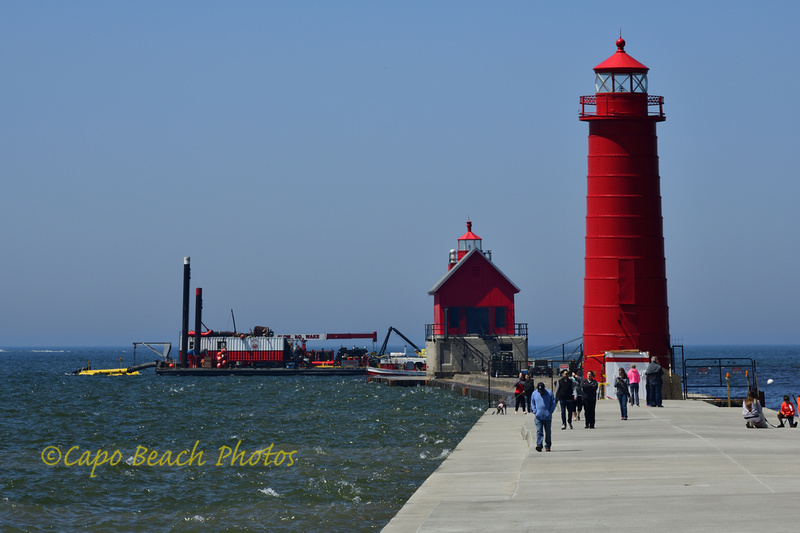 Originally built in 1893, the Grand Haven inner lighthouse south pier (and outer lighthouse), have recently been under renovation. In 2013, the City of Grand Haven repainted both the inner and outer lighthouse structures. The outer light is also known as the foghorn house though that feature was not added at this location until 1922. In the fall of 2016, renovation of the lighthouse pier structure began by the U.S. Army Corps of Engineers. This involved the partial demolition and reinforcing of the concrete pier structure to the inner lighthouse as well as the removal of the existing walkway surface. Reinforcing steel was also needed in the surfacing to help stabilize the concrete surfacing. The walking surface from the inner light to the foghorn house was not originally included in the $2.1mil. budgeted project. However, an additional $1.4mil. was added to the budget for the project, allowing the remaining 200 feet of pier concrete walkway to the outer light to be renovated as well. This meant the project completion was delayed. More delays were also caused by Lake Michigan water levels rising and being at an all time historic high. Even a high water level of just 6" posed hazardous working conditions to the workers. When the wave action of the Lake sends water over the walkway, it becomes very slippery and safety is of great concern. Two separate high water level delays caused the first reopening date of November 2017 to be pushed to July 2018. When that could not be met, again due to high water levels, the third reopening was scheduled for this spring 2019. It has now finally reopened.

The initial renovation project did not include restoration of the elevated iron catwalk which was so much an iconic element of the Grand Haven Lighthouse pier. When the catwalk had to be removed for the pier work, the towns people banded together for fund raising drives so that the catwalk could be restored and reinstalled. The fund drive goal of $1.0mil. was raised. The catwalk is now being reinstalled this spring 2019.

The photo above was taken in May 2018 while the outer 200 feet of walkway between the first light and the outer light was underway. This photographer will plan a follow-up trip to visit the Grand Haven lighthouse south pier to get a final image of the completed project and will share that image soon.