Port Aransas Light - Who's Got the Lens ? 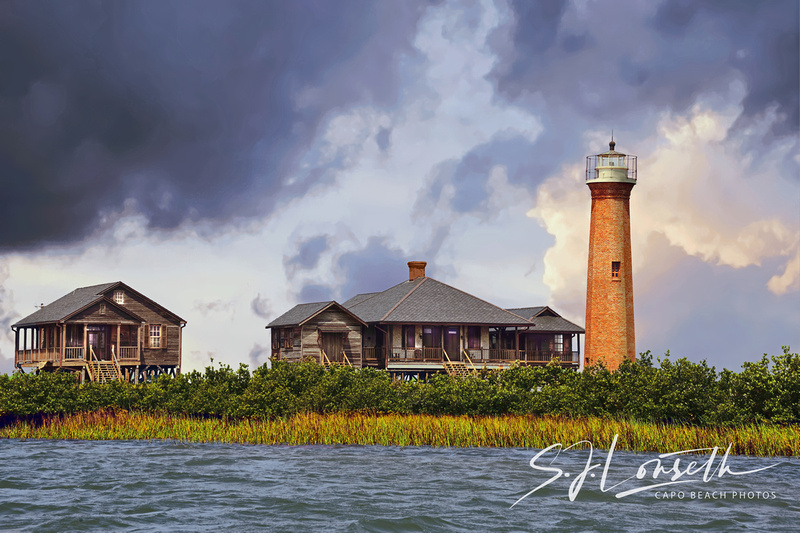 The Texas Gulf coastline is over 400 miles long and an almost continuous string of barrier islands. The few gaps that do exist between these islands become vital entries into harbors and inland bays needed for shipping traffic. Such is the case at Port Aransas where a natural and shifting gap in the island chain became a strategic point of access for the Confederacy and Union forces during the Civil War. The inland harbor access at Port Aransas and all the way up to Corpus Christi was vital for supplying the Confederate forces with munitions, food and providing for cotton export. The Union forces were bound and determined to stop this free flow of supplies with a blockade and seizing the town if necessary. Whoever controlled the lighthouse also controlled the shipping flow both day and night.

What once existed in 1847 as the natural harbor access between Mustang Island and St. Joseph Island was a series of lit buoys that had to be constantly maintained to be kept functional. When a regular steamship service route was established between New Orleans and Port Aransas in 1852, a permanent lighthouse was needed. The federal government acquired land from the State of Texas for a life-saving station at the harbor but also needed land for a tower which would guide ships through the channel. The federal government bought 25 acres of land known as Harbor Island just north of the natural channel access into the harbor. Harbor Island was and still is nothing more than seasonal adjusting marshland, sometimes inundated with water and other times just plain wet, in other words a bayou. After several surveys and committee meetings, a decision was made by the U.S. Lighthouse Board for a permanent screw-pile foundation and brick octagonal light tower that could withstand the gulf storms and marshy-like conditions of Harbor Island. Congress allocated $12,500 for its construction. It was also clear that all the island's access between structures would need to be by way of elevated walkways.

In 1855 a schooner carrying the bricks for the new lighthouse sank on a nearby sand bar. The crew was rescued but the schooner and the brick were lost. New bricks arrived in 1856 and the lighthouse tower was completed and first lit in 1857.

At the beginning of the Civil War in 1861, this entire area was under the control of the Confederacy. Fearing that Union forces would seize the light tower and thereby control daylight and night time harbor traffic and interrupt the much needed supplies for the Confederacy, the lantern room fresnel lens was removed and buried in the marshland behind the keeper's quarters. They would retrieve if after they had won the war, or at least so they thought. That original lens has never been found and remains buried under silt and sand of the marshland. In late 1861, the Union Navy began a blockade of the Texas gulf coast islands. In February of 1862, US Marines aboard the USS Afton seized the town of Port Aransas. They virtually leveled the entire town. A few of the original buildings still exist. The town's people abandoned the town for fear of living under Union tyranny. The possession of the lighthouse traded back and forth between the North and South several times throughout 1862. Then on Christmas Day 1862, Confederate General John Bankhead Magruder ordered the destruction of the entire light tower but only succeeded in destroying the top 20 feet, including the spiral staircase, of the tower with 2 kegs of gunpowder. With a Union garrison deployed at the lighthouse in 1863, Confederate troops attacked the lighthouse and killed 20 Union troops. A week later, Union troops regained control of the light tower and the island and held it until the end of the war. After the war, in 1867, the tower damage was repaired by the U.S. government. But the original fourth order fresnel was not to be found. The original brick used was a special colored orange red brown brick. For the reconstruction, the same color brick had to be found. A home in Mobile Alabama constructed of this same type brick was bought by the federal government and demolished for its special brick color.

By 1952 the shifting sands on the coastline at Port Aransas had moved the channel to the point that the light tower was no longer a significant help in guiding ships accurately into the harbor. It was deactivated and auctioned to private ownership in 1955. It changed private ownership several times but as of 1988 became owned by Charles Butt, the CEO of a large Texas grocery chain H-E-B. He began a slow process of restoring the lighthouse tower and the ancillary buildings. It is the only lighthouse in Texas with a permanent keeper who lives on the premises. It is the second oldest lighthouse in the State of Texas.