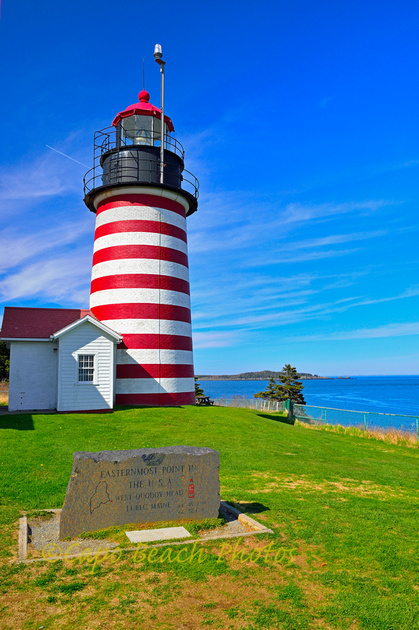 Known as the candy striped lighthouse, this USCG operated aid to navigation stands guard over the Quoddy Narrows several miles south of the Canadian border near Lubec Maine and is the easternmost lighthouse in the continental United States. From these lighthouse grounds one can see a small rock formation several hundred yards off shore named Seal Rock, that is literally the eastern most terra firma still called the United States. Standing on this rock formation, you can not get any closer to Europe and still be standing in the U.S.

Originally built at this location in 1808, it was replaced with the present day 47 foot painted brick conical tower in 1858. A keeper's house was also built in 1858 along with a fog signal house in 1887 and oil shed in 1892. The lighthouse was automated in 1988 and has the only remaining third order Fresnel lens of any Maine lighthouse. In 1990 the United States Postal Service commemorated the lighthouse on a 25 cent stamp. Seeing the high altitude jet plane just to the left of the lighthouse, one can only imagine it en route from some part of Europe.