The Nubble in Deep Space 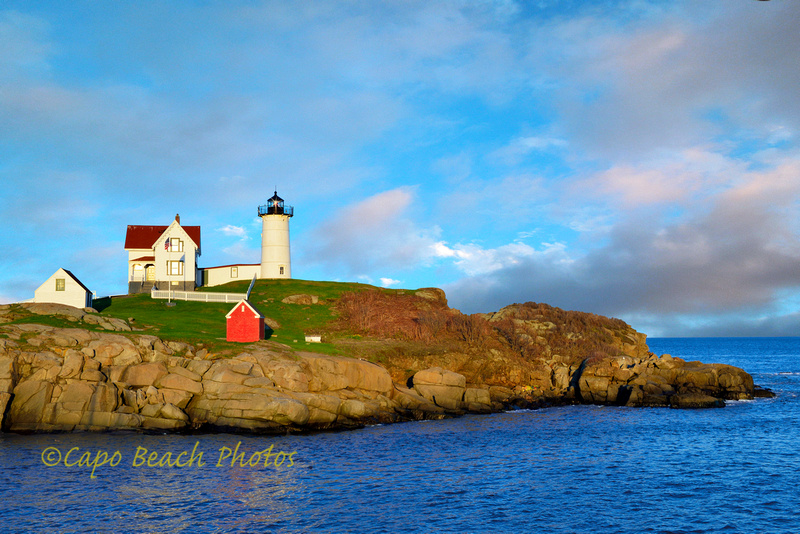 As an icon and classic American lighthouse simply known as "Nubble", this stalwart lighthouse is. . . Famous. So much so that the Voyager I spacecraft, launched in 1977, on its initial voyage to photograph our solar system, carried a photograph of this, The Cape Neddick Lighthouse onboard to show it as one of man's prominent structures. Other photos included The Great Wall of China and the Taj Mahal. All in hopes that, if discovered by intelligent extraterrestrials, it would show signs of what man has built on planet Earth.

Before its inception, The Nubble Lighthouse was talked about and planned since 1837. It wasn't until 1874, after numerous tragic shipwrecks, that Congress finally appropriated $15,000 for its construction. The U.S. Lighthouse Service dedicated the Light in 1879 and it has been in service on this islet ever since. Of the 60 lighthouses remaining in Maine, it is one of only eight that still operates with its original Fresnel lens.

Sheathed with a cast iron shell lined on the interior with brick, the lighthouse stands 44 feet tall but hovers 88 feet over the rocky cliff and sea below. The lighthouse is closed to the public but can be reached on foot at low tide. It sits just 100 yards off shore at Cape Neddick Point in the Village of York Beach, Maine.

This photograph was taken in the early evening hours as the sun was beginning to set. My wife and I rushed north along Highway 95 from Logan Airport in Boston, like Bonnie and Clyde escaping a bank heist, to catch the lighthouse before dark. In all fairness to my wife and her always calm demeanor, I should say I rushed, she was just along for the ride. We found only two other couples at the Cape when we arrived so that made for uncluttered photography.

On board the exterior of Voyager 1 in 1977 was attached a "Golden Phonograph Record" with several iconic hieroglyphs on the face. The Record had 116 images of earth and what life is like here. It included a photograph of The Nubble Lighthouse, sights and sounds of earth, images of symbolic gestures, people, animals and plant life but also had 55 modern and ancient languages. On Valentine's Day 1990,  with its original mission completed and on its way out to deep space beyond Pluto, Voyager 1 turned to take a "family portrait" of our solar system. In that photo was a tiny blue dot which was Earth. American astronomer Carl Sagan chaired the committee for NASA that decided what was to be placed on that Golden Record. Of that tiny blue dot, Carl Sagan said this:

"Consider again that dot. That's here. That's home. That's us. On it everyone you love, everyone you know, everyone you ever heard of, every human being who ever was, lived out their lives. The aggregate of our joy and suffering, thousands of confident religions, ideologies, and economic doctrines, every hunter and forager, every hero and coward, every creator and destroyer of civilization, every king and peasant, every young couple in love, every mother and father, hopeful child, inventor and explorer, every teacher of morals, every corrupt politician, every "superstar," every "supreme leader," every saint and sinner in the history of our species lived there – on a mote of dust suspended in a sunbeam".