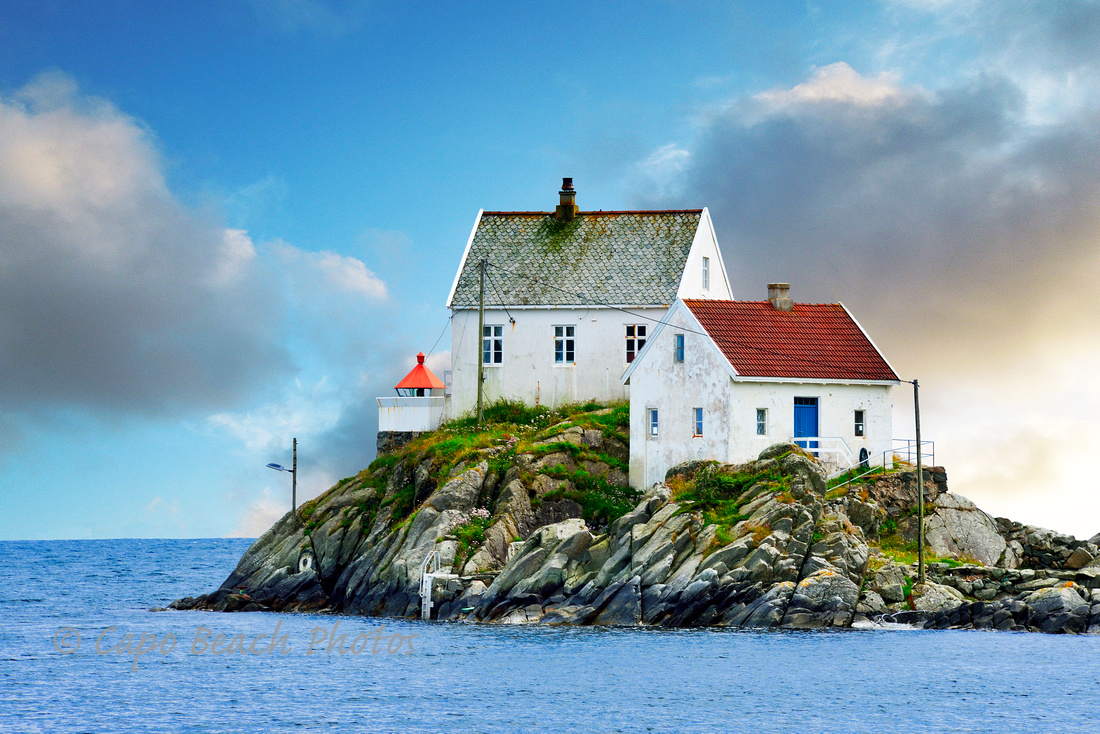 Isolated on This Island

On the small island of Vikaholmane at the entrance to Skudeneshavn harbor lies this lighthouse or navigational aid called Vikeholmen. The harbor was established in 1849 and the lighthouse built in 1875. It is one of four lighthouses on the larger island of Karmøy just north of Stavanger on the southwest coast of Norway. It is at the northern tip of what is known as the North Sea Road which stretches from Kristiansand to Haugesund. Karmøy is well known in Norway for its sandy beaches, chiseled low lying rock formations and heathered moors.

Of the four lighthouses (Høgevarde, Skudenes, Vikeholmen, Geitungen) on this larger island of Karmøy, Vikeholmen is the only one standing isolated at the entrance to the shipping harbor of Skudeneshavn. It was originally established by fishermen of the area and even today is run and maintained by the Seaman's Club of the harbor. Skudeneshavn is a major shipping and ship building port and the lighthouse has always been considered vital to the health and safety of the harbor. The seas around the island of Karmøy is fraught with underlying rocks and turbulent currents. The lighthouse as seen in this photo is not the original, it is an automated navigational aid today located on the same site and can be rented out as a vacation cabin. This lighthouse is one of 24 along the North Sea Road of the southwest coast of Norway. This area has been traditionally one of vital shipping and territorial reign since the early days of the Viking Era, beginning in 752 A.D. The nearby strait of Karmsund which separates the island of Karmøy from the mainland, became the source of the kingdom name "Karmøy" whose first prominent resident was Viking King Harald Fairhair, the first king to have unified Norway under one Kingdom of this name. His Royal Estate was located in Avaldsnes, on the north side of the island. That site is today the largest Viking era archaeological dig in Norway. The placement of lighthouses along this southwest part of Norway stems from the North Sea being such a vital connection between the Baltic Sea and the Atlantic Ocean. Fierce domination for its control has been a source of conflict for moire than a thousand years. During World War II, Germany felt it so important, they tried to fiercely dominate it. This is one major reason so many outposts were established by Germany along the coast of Norway, primarily at lighthouse sites, to make sure Allied forces were not invading and cutting off their naval lifeline to the Atlantic.

This photo was strategically taken from the site of a privately catered restaurant across the harbor from the lighthouse. While crews were setting up for the banquet that evening, I took this photo from their outdoor dining area while using a table as my tripod, a Nikon D800 with a 28-300mm telephoto zoom set at 300mm.